A friend of mine told me about a car by Henry Ford that was made almost entirely of hemp. It was unveiled as a prototype, and proclaimed to be the car of the future. Unfortunately, World War II and the DuPont corporation killed what would have been a lighter, safer and more cost effective car. I was asked to research the validity of this claim.

I had not heard of this car, so I googled it. Nearly every pro-hemp website mentioned it, but didn't give sources. Even YouTube has a video of this "hemp car" from 1941. It sounded like a good idea, and Henry Ford was certainly a visionary, but I really wanted the truth (I'm not anti-hemp; I'm pro-facts and anti-myth.)

So I went as close to the source as I could without calling the Henry Ford Museum: Period Newspapers.

Turns out that Henry Ford loved the farmers, and wanted to help them during the Great Depression. He knew that cars were always increasing in popularity, and if he could make plastic cars out of farm products, he could benefit Americans twofold:

An all-plastic car 300 pounds lighter than comparable models built of steel and having ten times the impact resistance of steel is near completion in the Ford plant at Dearborn, Mich., Popular Science Monthly announced last week. In a special interview, it was said, Henry Ford predicted that his test car, made of plastic body, hood and fenders, would be lighter, safer and less expensive. He added: "It will be a car of darn sight better design in every form. And don't forget the motor car business is just one of the industries that can find new uses for plastics, made from what's grown in the land!"
-New York Times, 2 Feb 1941

...Although it [the plastic] uses the same time of binder employed in some well-established plastics, which are not a Ford development, the remaining portion, that is, the fill, comes partly from the farm, in the form of strong fibers, such as hemp or ramie, and partly from the forest...
-Iron Age Magazine, 1941, as cited by Herbert Chase, Society of Automobile Engineers in 30 March 1941 New York Times.

We see that Ford was considering hemp as an element of his bio-plastic car. But was the car almost completely made of hemp? The hemp websites claim anywhere from 70% hemp to 100% hemp. 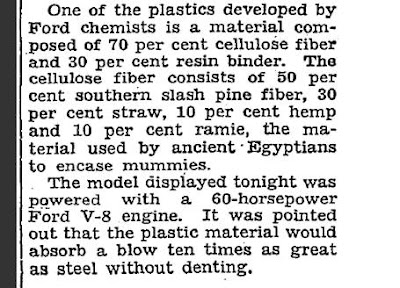 [article continues]  Mr. Ford tested the pliability of the plastic panel by swinging on it with an axe. The panel was unchanged after the blow, but a similar experiment on a steel panel cut through the metal. ...Needed materials, he said, would include 100,000 bales of cotton, 500,000 bushels of wheat, 700,000 bushels of soy beans and 500,000 bushels of corn. "Plastic raw materials may cost a little more," he said, "but we anticipate a considerable saving as the result of fewer fabricating finishing operations."
-"Ford Shows Auto Built of Plastic - Strong Material Derived from Soy Beans, Wheat, Corn is used for Body and Fenders," New York Times, 14 August 1941.

The bottom line, as I see it, is that the car was not comprised entirely of hemp; not even 50%. Nearly all of the websites are either misleading, or flat-out wrong. Does this mean hemp is not a useful material? No - there are many uses.

I just like checking the validity of claims to historical facts. Oh, and the part about DuPont probably being responsible for killing the bio-plastic industry? This is likely true. 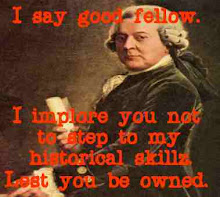 PottsAntiques
I've lived in 5 states in the past 9 years. I went to college in Kansas, Florida, and New York City. I'm an Antiques & Fine Art appraiser, and I've worked in several different museums. Currently, I'm learning American Sign Language. I'm the kind of person who will go into an Irish bar on St. Patrick's Day and order a Bass.

Websites & Blogs On Which I Waste My Time: